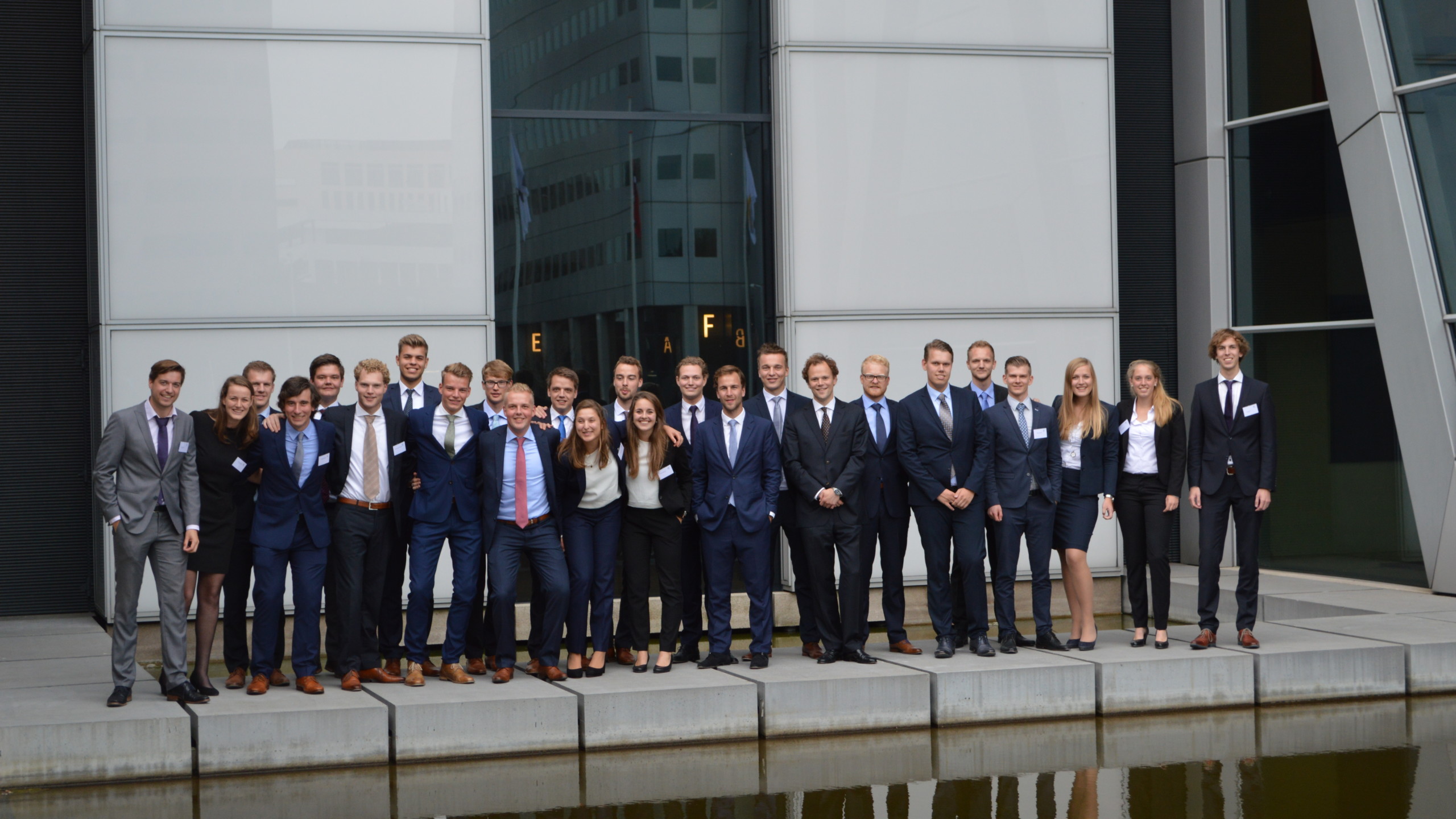 Sunday evening, September 25, a group of highly motivated Accountancy & Controlling students travelled to Amsterdam for an inhouse tour of three days. The group consisted of Master and third year Bachelor Accountancy students. The first audit firm we visited was the head office of KPMG in Amstelveen, one of the Big Four audit firms. In small teams we made a case in which we pitched for Smooth & Juicy BV, a fictitious new client for KPMG. Afterwards, another case was made about a real, comparable client of KPMG. After the cases, there was time for information on career and internship possibilities and an informal lunch with the staff audit members and the recruitment team.

Satisfied of the delightful lunch we headed to our next firm: EY, located at the ´Zuidas´, Amsterdam. With a high welcome (about 80 meter high, that is), a great view and some coffee in the boardroom we started an interactive presentation made possible by a mobile app. A nice way to get to know EY! Then, we were challenged to think about ethical problems regarding the audit profession, like integrity and issues between staff members and management. Divided in teams we had to come with the best solutions to these issues and ultimately present them for the group. The informal part at EY was during the cooking course at de Kookstudio Nine, where we had to make delicious Italian dishes!

The second day, we started early at a client of BDO: BrandDeli. This client sells commercial time from television channels like MTV, TLC and Discovery. As BDO auditors, we had to find errors in the contracts and the distribution reporting to the shareholders. The head of Finance of BrandDeli said if we found one specific error, he would offer that person a job. Unfortunately, no one was able to find it.

After a quick lunch, we headed to PwC, the third Big Four firm this week. In the Data Lab, we got a presentation of Bram Verhoeven, partner of PwC, about the merger of Ahold-Delhaize. Bram was leading the audit team during the merger of the two firms. When we had gathered enough information about Ahold-Delhaize, we had to prepare a kick-off meeting. In this creative and open meeting, we had to discuss about significant risks and new developments in the market of Ahold-Delhaize. At the end of the day, a bus drove us to a restaurant called ´instock´. A restaurant that receives their supplies from a supermarket, what otherwise would have been thrown away, to prevent excessive food waste. Very durable! During the dinner, former board member of Risk Attie Wang, currently working at PwC, told us about auditing Sustainability Reports.

The last day we started at Mazars, which was just a few blocks away! At Mazars, we had an interactive trivial-like mobile presentation as well. At Mazars we didn't have to make a case, but we did a personality test. Everybody in the group got a colour: red, blue, green and yellow, which indicate your personality, like introvert - extravert, analytical - dynamic etc. After the group was separated in colours, we had to discuss some team issues with the opposite colour.

Time flew by, and after the lunch we headed to the last Big Four firm; Deloitte, which has got the most durable office building in the World! The building, called ´the Edge´, delivers more energy than it consumes. At Deloitte,  we played 'I love Deloitte', a variant of the RTL show ´Ik hou van Holland´. We played the birthday game, including a ticking time bomb and the gossip game, where we had to tell a story with 100 words and then had to tell it to a teammate outside the room. A really fun way to get to know Deloitte! After the game, we had to debate about issues regarding the changing audit profession. We ended the day with some drinks and tapas in the restaurant in the Edge, where some of us could make a clip to join the Deloitte Business Course in Budapest.

Once all the fun and experiences had come an end, we had to travel back to Groningen. Hopefully, the choice of which audit firm to choose is now a bit easier for the participants and at least I can say on behalf of the Accountancy Week Committee we had a great time!