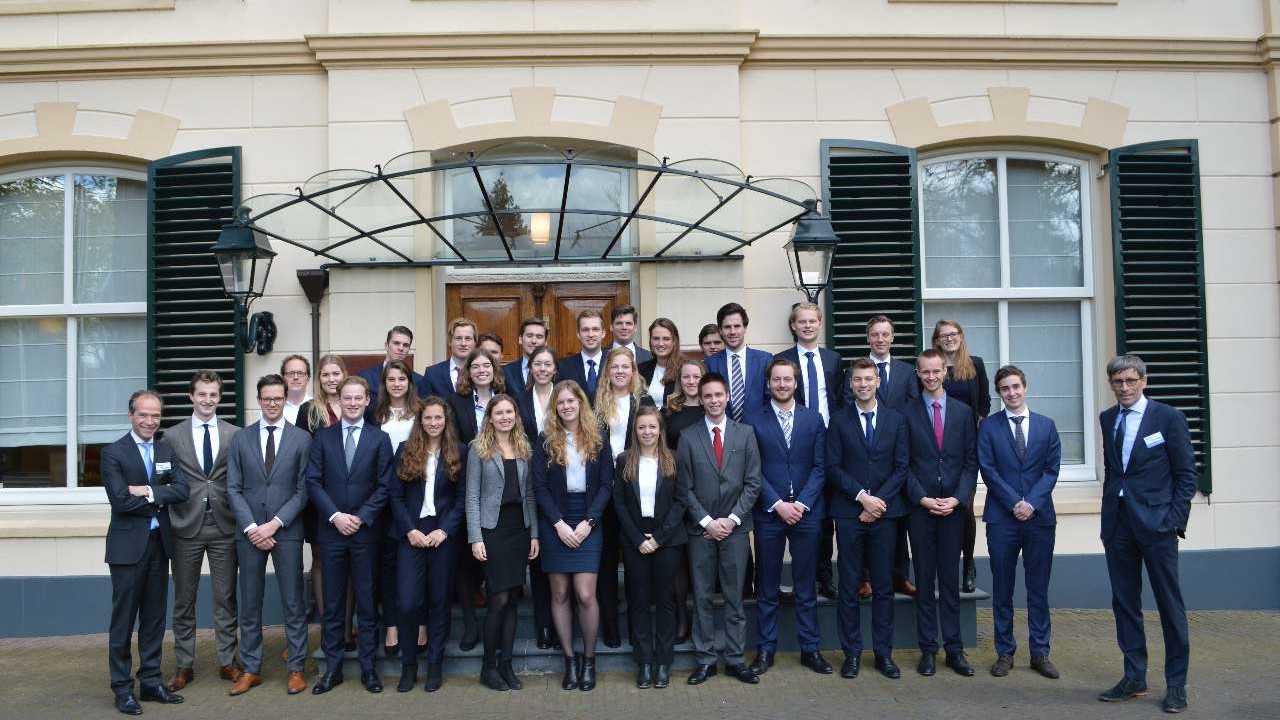 Sunday evening the 23rd of April, a group of 25 fresh, enthusiastic students left Groningen, prepared for three intensive days of company visits. As a pub quiz was already organized the week beforehand, the participants already got to know each other which made everyone feel at ease during the three hour journey to our hotel in the idyllic town Abcoude. After checking in in our hotel rooms, we enjoyed a small drink all together in the restaurant. The tour had finally started!

Slightly tired faces walked into the restaurant on Monday morning, but after a good breakfast and a fresh cup of coffee everyone was good-to-go to travel to Rembrandt M&A in Amsterdam. The company, which is part of Rabobank Group, provides advice and support on mergers and acquisitions of up to 75 million euros. After a warm welcome and a short company presentation, we all had to dive into a simple, how appropriate, M&A case in which we had to value a beer company ready to be taken over. As some students were more familiar with valuation than others, there was a lot of interaction during the case. Afterwards, the case was discussed and we were given some key insights on valuation.

The afternoon was reserved for Zanders in Bussum, a consultancy firm of approximately 140 employees specialized in treasury management, risk management and corporate finance with offices in several countries. As everyone was already well prepared awaiting us, we were soon ready for the next presentation by employees from several departments. As one of the presenters was a participant of last year’s Risk Advisory Inhouse Days, his story on his role in the company was even more captivating. Split up in four groups we had to make a case next on treasury management where each group was accompanied by someone from the firm. The idea of the case was to convince a Turkish telecom company to employ us, as Zanders, to provide them with the necessary guidance in order to solve their risk management struggles. Despite a rough start, every group was able to come up with a well-defined plan and an accompanying, sometimes surprising pitch. Afterwards, it was time for some well-deserved drinks and an inside BBQ as the weather was not too favourable to us that day. Nonetheless, the nice atmosphere, the presence of several Zanders colleagues and a guided-tour throughout the building made the dinner a success. Thereafter, we ended the day in style with a few beers at the local Irish pub of Abcoude.

Despite a rough start, every group was able to come up with a well-defined plan and an accompanying, sometimes surprising pitch.

A visit to SINCERIUS, the only financial due diligence boutique in The Netherlands,  was planned on Tuesday. After being welcomed at their office in the heart of Amsterdam, we started with a short introduction to the whole due diligence process. SINCERIUS is a relatively young and small firm with 12 employees, but has already provided financial transaction advice for a wide range of firms, like Fletcher Hotels and Leapp. They decided to prepare a case on the sales process of a firm in collaboration with PhiDelphi Corporate Finance which we would visit the day after. The first part of this case was based on the due diligence. All groups obtained documents on, for example, financial, legal and personnel issues which we had to sort out. As a twist, every group could win additional information on due diligence issues by solving short, but challenging analytical problems as quick as possible. This made the case a lot of fun and all groups were highly competitive. Due to the enthusiasm of the teams, the challenging case and the extensive lunch, the students greatly valued SINCERIUS’ program.

Up next was PwC, which started with a presentation by one of the employees of the consultancy department and one of the managing directors of PwC who fascinatingly explained how current developments in the world influenced her own tasks and that of PwC in general. To ensure some variety, PwC scheduled an escape room for us next to a consultancy case. Naturally, the former was perceived with a lot of excitement as everyone could set their minds off the mostly serious day. During the rather short case we had to prepare a pitch on why PwC should be the one to advise a private jet company which was caught by surprise of 30% over hours. Logically, the presentation and case gave us just a small insight on what was possible in the consultancy department. However, the social and dinner greatly enhanced this as a lot of PwC colleagues, of which several from Groningen, were present to further inform. Despite the great atmosphere we had to leave PwC  to finish our second day.

Logically, the presentation and case gave us just a small insight on what was possible in the consultancy department.

Wednesday was already the last day of our tour, leaving the hotel around 8 o’clock, this time with our suitcases. Once again everyone was ready well ahead of time and with the sun out the day could not start any better. After our arrival in Hilversum, it was just a short walk through the park to PhiDelphi Corporate Finance for our final company visit. The company is an independent M&A consultant focussing on transactions between 10 and 100 million euros. As they counsel the whole sale, acquisition or financial restructuring of a firm, they have a wide clientele basis. After a short introduction, we were guided through the second part in the sales process of a firm, building upon the explanation of SINCERIUS. Subsequently, we had to prepare ourselves in groups for upcoming negotiation talks by thinking of a strategy when meeting with either the selling or buying party of a company developing augmented reality glasses. As some employees of the companies had deviating wishes or tried to set us up against each other, the negotiations between the duos at the end were quite intense. Without a doubt, this was highly appreciated by the spectators. Together with all employees of PhiDelphi Corporate Finance we perfectly ended the day outside with some ice cold beers and snacks.

We hope this tour has helped the participants a little further in their orientation towards the consultancy and advisory sector and enjoyed these days as much as we did!