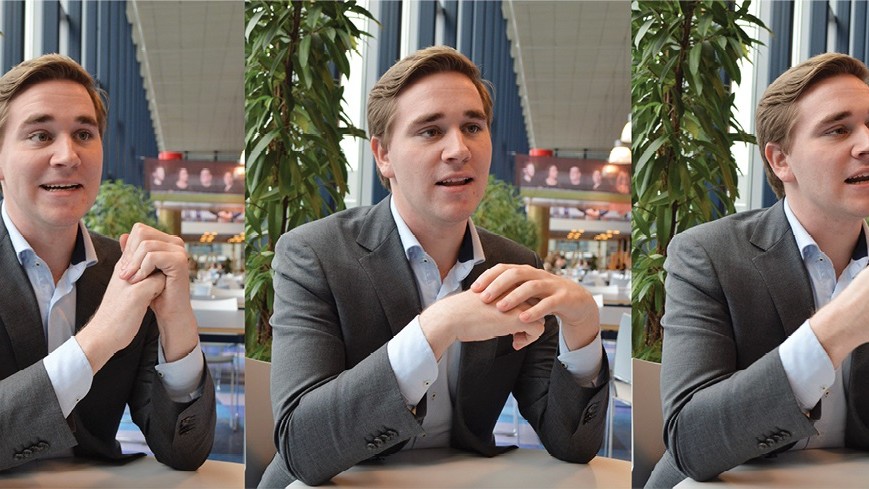 Hello Christopher, could you please briefly introduce yourself?
My name is Christopher Timmerman and I was a student of the RUG until I graduated with my MSc Finance earlier this year. I am half Dutch, half American and I lived in the USA just outside of Detroit, Michigan up until I graduated with my bachelors in accountancy and decided to pursue a master degree in the Netherlands. I quickly became active with Risk and stayed an Active Member up to graduation. Now I am living in the Randstad and completing a graduate internship.

What have you done within Risk?
I began with Risk during my pre-master when I became an editor for the Risk Magazine as well as an event organizer for the Risk Finance Society. Being an Active Member at Risk was so much fun that I decided to hold those positions during my master and eventually I got the honor of being asked to become the head editor of the Risk Magazine.

You also worked on the Risk Magazine before we decided to change the concept. What do you think of this new Risk Magazine Website?
Yes, I did and I got the pleasure of being head editor as we made the switch last year! While I enjoyed the old Risk Magazine it was great to update it to be more mobile-friendly and accessible. The new website allowed us to shine a brighter spotlight on each of our editors and give the attention their articles deserve. In the end it resulted in a large increase in views which is great for not only the Risk Magazine, but the association as well. Also it made the publishing and back-office work simpler as each editor could write and design their entire article on the website.

Why did you decide to become an Active Member of Risk and what did you learn during your active membership?
Honestly, I had no idea what to expect when I joined Risk. I was the vice-president for the university investment club during my bachelor degree, but that was only about 50 members compared to the 1400+ members of Risk. While Risk is great to build up a CV, I joined it for social purposes as I was “fresh off the boat” from the US and didn’t have any friends yet. It ended up easily being the best decision I made while studying in Groningen. While I took Dutch lessons at the university, I became much more comfortable with my Dutch by attending Investment Evenings, socials and Active Member Weekends. Regarding soft skills, both the Risk Finance Society and the Risk Magazine improved my planning, leadership and communication.

It ended up easily being the best decision I made while studying in Groningen.

How did you decide to study Finance and what did you learn from these studies?
My father is a personal financial planner so I was aware of finance when I was younger. I remember him watching the stock market news every morning and I was curious about all the tickers and prices scrolling the screen. After beginning my bachelor degree I quickly realized there is much more than trading and became intrigued with corporate finance. Analyzing different​ projects or transactions a company comes across and commenting on their financial viability is stimulating. No two projects are the same. Through my master I learned not only about financial statements and valuation, but also how to read between the lines and be prudent.

I heard you are doing an internship at Accuracy, how is that working out?
It has been a great internship so far. I actually came across Accuracy during a Risk Investment Evening last November and clicked with the team during the networking drinks. Since I began in March they have given me a lot of responsibility right from the start and have put me in a variety of projects to give me a full scope of what Accuracy is about. So far I have worked on three very different projects: due diligence, corporate recovery services/valuation, and an arbitration case. The work is stimulating in that it utilizes a lot of the finance skills I learned during my master.

Another perk is the team is young and enthusiastic. We engage in frequent trainings and enjoy having a drink or dinner together after work. Also because the team and client base is international, we work frequently in English making it easier for me to communicate while also improving my Dutch.

What advice would you like to give your successors? (all future cover interviewees on the Risk Magazine)
Be willing to take risks. When I moved to the Netherlands I had no idea what to expect. If I decided to stay comfortable and just find a job in the US instead, I would be a very different person working in a job I probably disliked. While it is hard at times, living in a new country improved my career opportunities, gave me new friendships and allowed me to see a lot new places.