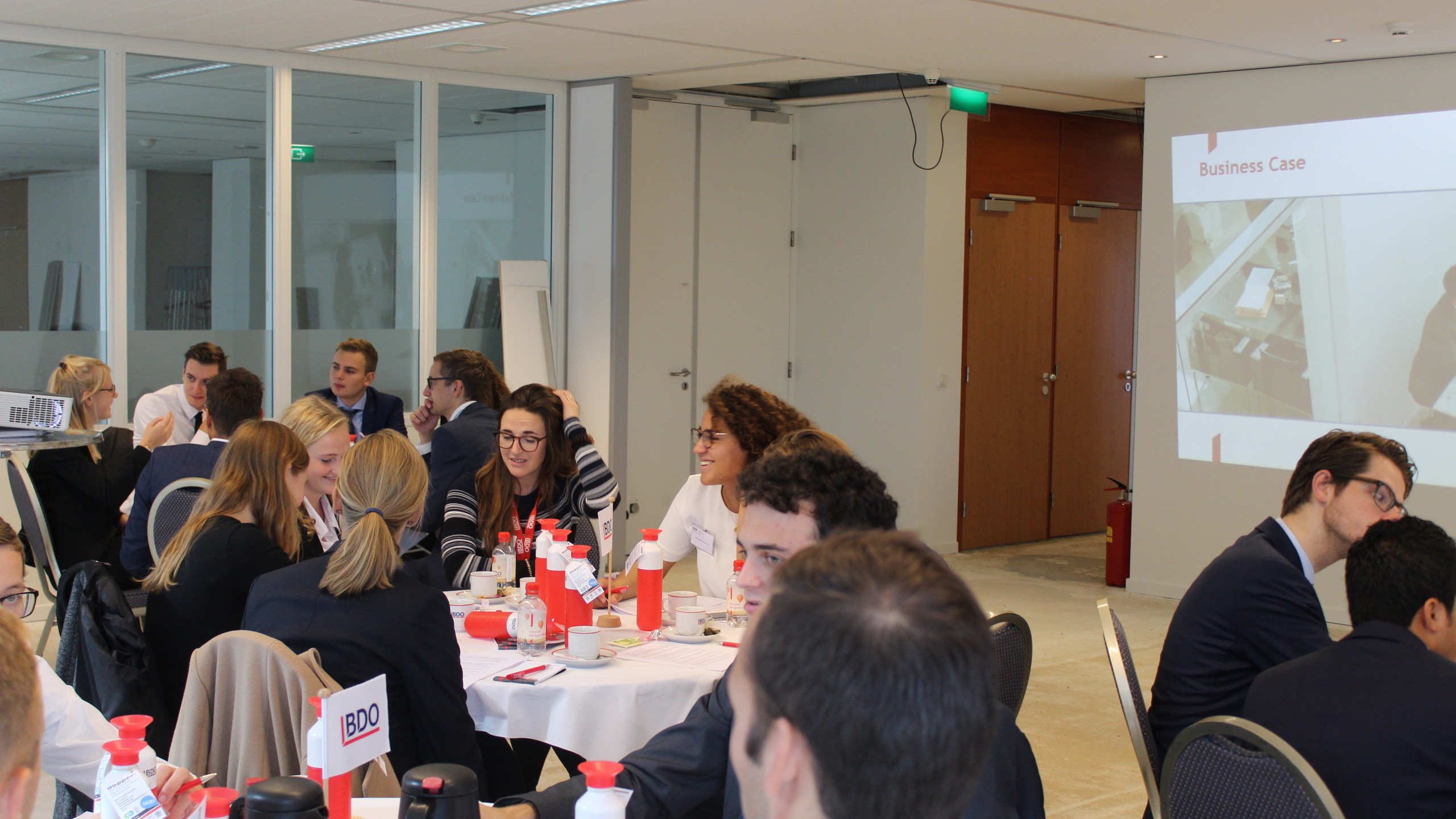 On Sunday evening a group of 25 highly motivated Accountancy & Controlling students travelled to Amsterdam for a three day inhouse tour at the six biggest accounting companies. The group consisted of Master and third year Bachelor Accountancy students. Monday morning we first visited BDO in Amstelveen. In small groups we explored the building of BDO with the game “Crazy 88”, whereby 88 tasks had to be fulfilled such as proposing to a partner. Afterwards, a case about football club AZ was made and we met with one of the partners. At the end we had an informal lunch with the audit employees and the recruitment team.

The goal was to find out during interviews who out of three people committed fraud and how they did it.

Satisfied of the delightful lunch we headed to our next firm: EY, located at the ´Zuidas´, Amsterdam. We were brought to the boardroom at the top of the building. There we started with some coffee and a presentation about EY. Then we got to meet a partner and ask all our burning questions. After that, we were divided into small teams to work on a fraud case. The goal was to find out during interviews who out of three people committed fraud and how they did it. This was extremely fun and we are still amazed by the acting talents of the employees of EY. During the investigation we got a tour through the amazing building. In the evening we had a small buffet and we ended the day with a fun pub quiz.

The second day, we went to the headquarter of KPMG in Amstelveen. We started with a introduction of the company and an art tour through the building. After the tour, each team had to prepare a pitch of their favorite painting and present this for the group. Next, the teams had to think about the future of the accounting profession and present this. After the presentations it was time for an informal lunch with the audit employees and the recruitment team.

Then, we played the gossip game, where we had to tell a story with 100 words and then repeat it to a teammate outside the room.

In the afternoon we visited Deloitte located at the ‘Zuidas’, Amsterdam. We started with a presentation about Deloitte and a case about the football club Ajax. After this a partner came to tell about his experience and answer all our questions (we had a lot of them). Then, we played the gossip game, where we had to tell a story with 100 words and then repeat it to a teammate outside the room. The last team player had to try telling the original story. It was a fun way to get to know Deloitte. After the game we got a tour through the building. We ended the day with a walking diner with delicious small dishes and drinks with audit and recruitment employees.

The third and last day we started the morning at Mazars in Amsterdam. After the introduction we worked in small teams on a case about a company that sells sport items. We had to find irregularities in the financial statements and graphs that were provided. This was a very interesting and fun case because of the focus on numbers, which we know all accountants love. After the case we got the chance to talk to a partner and an employee about working at Mazar. At the end it was time for the lunch with luxurious sandwiches and the most important part, a “kroket”, this was a huge success.

They are making their own robot that is assembled with parts printed by a 3D-printer.

In the afternoon it was time to visit the last firm of the Accountancy Week: PwC. We started with a small introduction about PwC. Next, we were divided into two groups. The first group went to an escape room located in the building. This was extremely fun and we managed to get out in time. After the escape room we got a tour and saw the work floor and the experience department of PwC. This department works on innovative modern ideas to help the company with consulting and audit projects. They are making their own robot that is assembled with parts printed by a 3D-printer. After the tour we were divided into smaller groups. One person of the group got a picture and had to explain this to her teammates. The rest of the team had the task to ask questions and replicate the picture. This led to some hilarious results. After this we were brought with a touring car to the city center of Amsterdam where we had a delicious diner. After the dinner it was unfortunately time to travel back to Groningen. On behalf of the Accountancy Week Committee I can say we had a great time and we hope that all the participants had a fantastic week experiencing all the accounting firms.