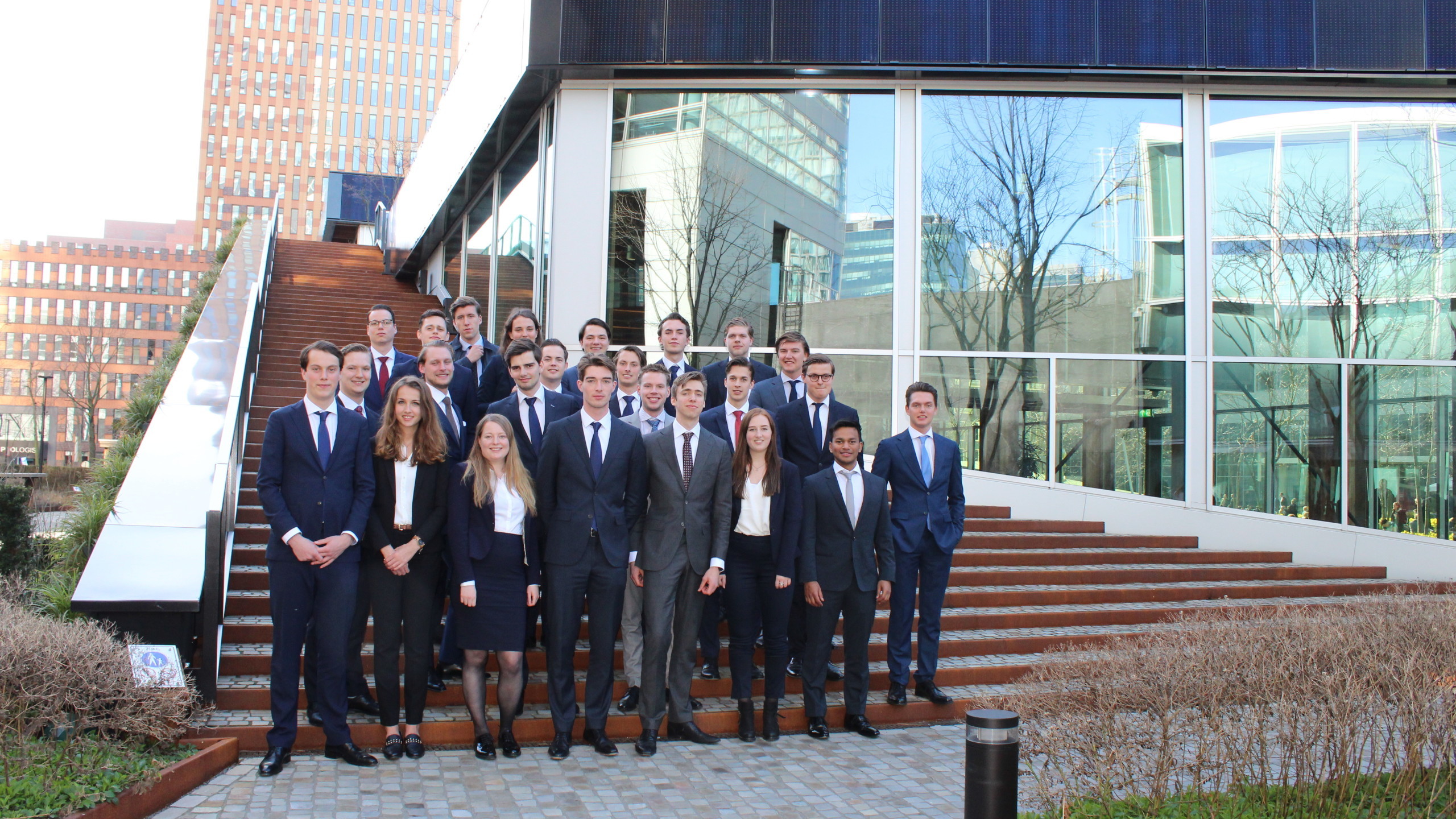 It has been five weeks since the Dutch Banking Tour started. During this three-day inhouse tour, 25 top cv-selected students visited six financial institutions in the Amsterdam area. In order to refresh everybody’s knowledge on valuation and for the participants to meet each other, a valuation workshop was organized on Thursday the 21st of February. The workshop, provided by Lindenaar & Co, was concluded with a nice dinner and some drinks in the city centre.

Sunday evening, we left Groningen and we went to our hotel right in the centre of Amsterdam at P.C. Hooftstraat. After some Belgium beers in one of “De Pijp” its finest bars, we went to bed on time to make sure everybody was awake bright and early the next morning!

After an early wake-up and a quick breakfast, we left our hotel and took a train to Utrecht Central. Both De Volksbank and Rabobank are based right next to the central train station. We started off with De Volksbank, where we were welcomed by a large group of enthusiastic trainees, associates and managers. They started the inhouse with some interesting facts about the origination of De Volksbank and the different departments within the bank that make a big difference for our society. After some sharp questions, we started with a special case on ratio management within the bank. It was interesting to see the different views on bank management within the group! We concluded our inhouse at De Volksbank with a big lunch, where we could fire all our burning questions to the staff of De Volksbank. Thereafter, we walked a few hundred meters to the head office of Rabobank. Once there, we got welcomed by two recruiters of corporate banking who started off with a presentation about the bank. After the general presentation, a group of young professionals taught us a lot about the challenging work within the departments Acquisition Finance, Financial Advisory & Solutions, M&A and ECM. The participants of the tour were clearly impressed by the daily cases within the corporate departments. We concluded the day with some talks, beers and a walking dinner at Rabobank’s own bar “het Bruine Café”.

Tuesday morning we took the train to Amsterdam Zuid, which is the train station of the well-known business district “De Zuidas”. Both Van Lanschot Kempen and ABN AMRO are situated on a walking distance of Amsterdam Zuid. We started off with Van Lanschot Kempen. Some time ago, financial service providers Van Lanschot and Kempen & Co merged into one independent financial institution focussed on private investors. Once arrived at their beautiful office, the group got introduced to the organization and was shown the dynamics of the bank at their trading floor. After this interesting inside tour, we got to work on a M&A investment game. Each group of participating students was assigned a bicycle firm and received some general information about their competitors. The goal was to come up with the best deal, either by taking over one of the competitors or by merging with them. After the group presentations and announcement of the winners, we closed our morning at Van Lanschot Kempen with a lunch together with the employees of the investment bank. Thereafter, we walked to the head office of ABN AMRO. We were welcomed in their pavilion, called the CIRCL building. Interesting fact is that this building is built completely circular and thus is very sustainable. After an introduction about ABN AMRO and the opportunities for the participants, given by four trainees, we got to work on an interesting acquisition case. The group was divided into a sell side and buy side. After some heated, but interesting, debates, all of the groups reached an agreement and either sold their company or took over the other one. The duo presentations were brought with a lot of enthusiasm and were quite amusing due to the unusual conditions of some of the takeovers. To name an example, one of the agreed conditions stated that an amount equal to 25% of the final offer had to be paid out when the takeover was not pushed through by the buyside. We concluded our day at ABN AMRO with a delicious walking dinner at one of ABM AMRO’s favourite grand café’s.

This was the last day of our tour already! On Wednesday’s schedule we had two banks to visit: Duff & Phelps and NIBC. For our first visit, we took off to the Rembrandt Tower at the Amsterdam Amstel, in order to visit Duff & Phelps. This American company is well known for doing complicated valuations and is regarded as one of the best firms in this field. The Duff & Phelps office was situated at the 20th floor of the building, so we all got to enjoy a nice view as well! Once there, the Managing Director of Duff & Phelps Netherlands introduced the organization. Hereafter, we got to work on a challenging case about valuation. By means of a DCF and peer group analysis the students had to come up with a bidding range for a company. Finally, the groups had to present their bid. Hereafter, we got rewarded for our efforts with some drinks and a chic lunch at the office’s work floor. After Duff & Phelps, we took a private bus to NIBC’s head office in The Hague. We were welcomed by their recruiter, who had a nice quiz prepared about the bank. Did you know that NIBC was founded in 1945 to finance the visionary entrepreneurs who helped rebuild the Netherlands after World War Two? I didn’t either! After the quiz and some information about the opportunities for students within the bank, a senior manager of the bank told us a lot about the different divisions within the bank, the kind of cases they work on and the deals they made. Many questions were answered where after the group got divided into buy and sell sides for an impressive M&A game. Even though we got to practise on our negotiation skills the past several days, or perhaps therefore, some extra time was needed before deals were reached that satisfied both parties. After the announcement of the winners, who received a beautiful NIBC cheese slicer, we concluded the day with a social and walking dinner where the students got to meet employees of NIBC while enjoying a refreshing beer.

After the last company visit, it was time to head back to Groningen already! All students were pretty exhausted from the intensive, but impressive tour. Where some of the participants slept through the entire return trip, others couldn’t stop talking about their gained impressions. We certainly hope all students learned a lot, got more insights into their future career and made useful connections. See you on the work floor!