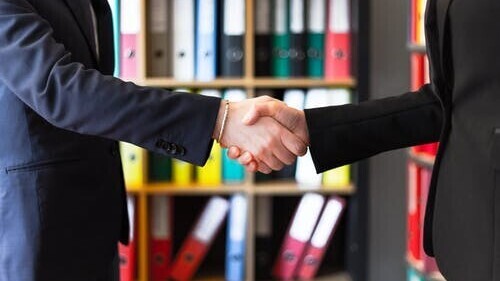 Cheap financing and booming stock markets – the perfect catalysts for a record-breaking year of dealmaking. 2021 registered the highest ever levels of Mergers & Acquisitions (M&A) since records began more than forty years ago. Total value measured more than $5.8 trillion across 62,193 deals, up 64 per cent from the year before, levels not seen since the mid-1990s.

The largest deals of the year included the merger between AT&T Inc and Discovery Inc, valued at $43 billion, as well as the breakups of American corporate behemoths General Electric Co and Johnson & Johnson.

As for the sector composition, unsurprisingly, technology led the field, making up the majority of deals, followed closely by financials. This is mirrored in the overall sentiment of the stock market, where tech stocks have outshone their competitors in the latest bull run.

Exit multiples have also risen significantly in the last few years. This is a way of estimating the fair value of a business by multiplying financial statistics, such as Earnings before Interest, Depreciation & Amortization (EBTIDA) by a metric that is shared between its competitors. Some of the sector-specific metrics used in these valuations can be a little unorthodox for the fast-growing businesses. During the dot-com bubble, metrics such as “page views per quarter”, “stickiness” and even, “eyeballs” were used.

However, while the value of these deals has been rising, the composition of this market is changing. Mega-mergers, such as the ones listed above are becoming increasingly scarce. In 2021, transactions worth more than $10 billion accounted for less than just one-fifth of the total deal value. This is compared with an average of more than one-quarter, in the years preceding the pandemic. The issue behind this shift? Antitrust Watchdogs.

Regulatory bodies across the globe are cracking down on large deals at an increasing rate. In November 2021, the U.K. competition and Markets Authority (CMA), unveiled its intentions to conduct an in-depth investigation into the proposed merger between Nvidia and U.K. based Arm. Since then, Nvidia has responded with a letter outlining the potential benefits of such a coupling – in an effort to keep the $40 billion deal alive.

American Airlines and JetBlue’s “Northeast Alliance” was also challenged by the US Department of Justice, just months after the Department of Transportation had given the green light, demonstrating the Biden administration’s commitment to aggressive antitrust enforcement.

It may be worth revisiting the past to help us forecast the future. In the late 1980s, during a large increase in inflation, not too dissimilar to what we are experiencing today, the conditions affecting mergers had changed. As interest rates rose to tackle the inflation problem, debt financing become more difficult and as such potential takeover targets became expensive. It was only the large, cash-heavy firms that were able to take advantage of the environment, and poach smaller, rival firms. We might reasonably expect a rise in hostile takeovers under this logic. Divestitures may also play an important role in the coming years, as firms seek to strip down their companies to the core value drivers following the pandemic uncertainty. We have already begun to notice this behaviour, as noted earlier in the article, but also this week – with Citigroup deciding to scrap its global consumer banking division. Toshiba has also recently released a bold plan to separate into three standalone companies in a November 2021 letter to shareholders.

We may reasonably expect a decline in the levels of M&A activity this coming year for several reasons. 2021 numbers were bolstered by delayed transactions from the early periods at the start of the pandemic. SPACs, which experienced their time in the spotlight at the start of 2021 have since begun to fade away as fast as they came in. Total SPAC value accounted for 10 per cent of the year's transactions, the result of 335 announced initial business combinations. Frothy valuations, and high corporate spending is also viewed by many as being a typical late-cycle indicator.

For the investors among us, it is important to consider the developments in the M&A markets, as these deals act as signals for the growth perspectives of the businesses. Has a stock in your portfolio begun to show increased interest in dealmaking? – Maybe it’s time to revaluate why this is the case.