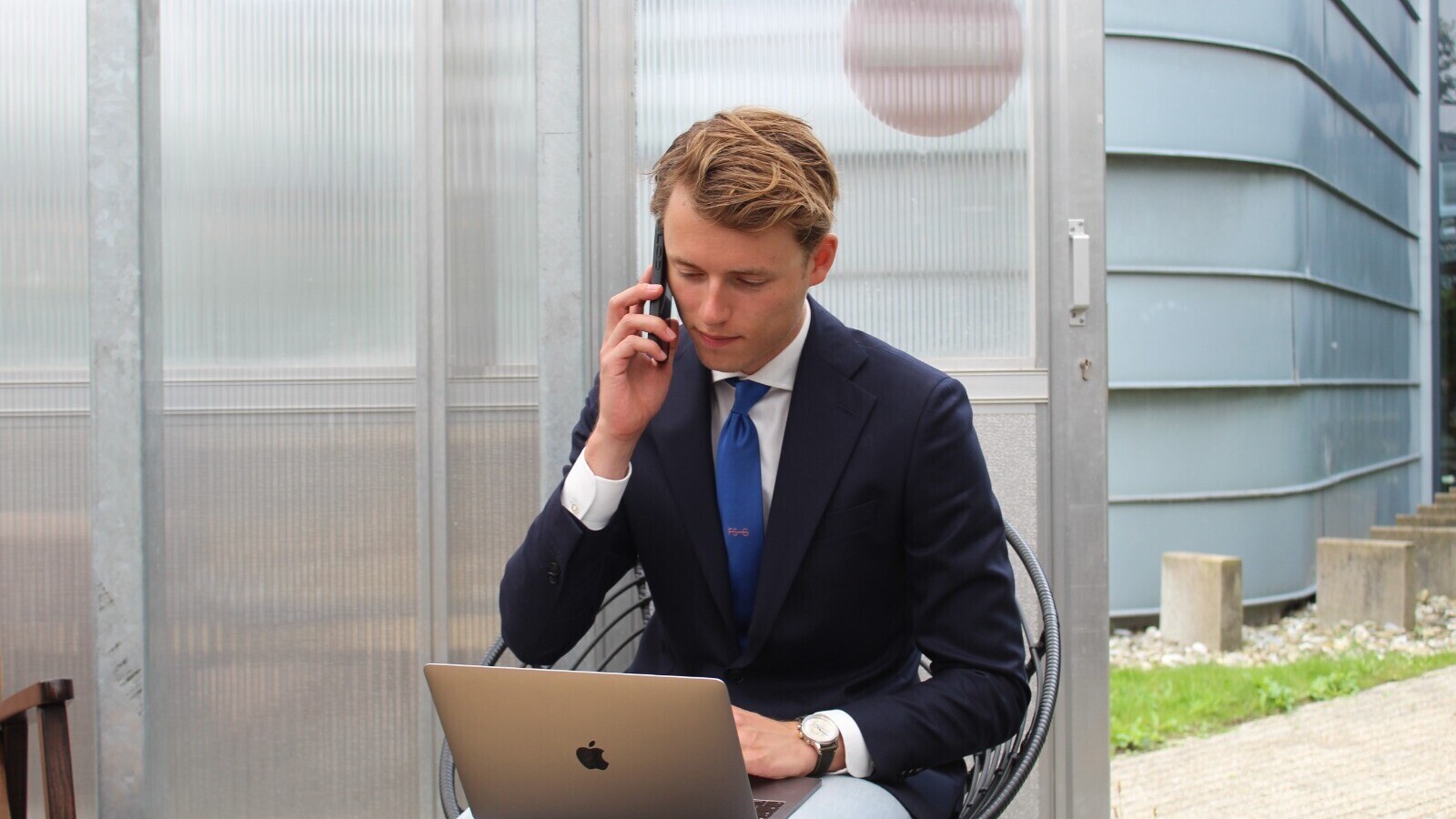 The clock is ticking and Pieter has been with FSG for over eight months. Even if the next installation of the new FSG board in 2022-2023 is still five months away, FSG is already looking for a new replacement! There could be a slew of questions about joining the board, particularly given Pieter's role as chairman. Pieter was interviewed by the FSG journal committee to answer the basic questions first. Let's get this started!

Hi! To begin, could you briefly introduce yourself?

Sure. My name is Pieter. I'm 23 years old, and I've lived in Groningen for more than five years now. I grew up in Heerenveen, Friesland which is about a 50 minutes drive from Groningen. At the beginning of my studies, I did my bachelors in international business and I started rowing right away at Aegir, the Rowing Association and was active there for about three years, one year of recreational rowing, then one year of competitive rowing, and one year of coaching competitive rowing. In my spare time during this board year, I still like to catch up with friends by either going for a drink or cycling together in the countryside surrounding Groningen.

We are aware that FSG is a merger of PM and Risk, however, were you an active member of either association prior to applying for chairman?

Yes, In 2018 I took part in the advisory in-house day’s committee, which is currently the advisory tour that we have. During that tour, we visited six consultancy firms, the main focus was on M&A and debt advisory. That was my first time getting to know FSG (or Risk at that time).

You were quite involved! So what then motivated you to apply for the board year at FSG? And what positions did you apply for at that time?

My motivation for doing this board year is just because I love the environment so much, you know the people who are involved in this association, to people who study the programs that we have at our faculty, they just give me a lot of energy. And I figured it would be a great learning experience and great fun to just be a part of that in, in general. So, what else to do than apply for a board position!

I was active as the advisory tour advisor in my active member days and the magazine committee after that. That was a nice set-up to do actually more active involvement. The most active involvement you could have with any association, which is a board year. And what mainly motivated me besides that is the increased soft and hard skills that you learn from this. So I think that says a lot as to you how this association opens you up to new possibilities and new people.

I am still curious because your position is chairman, did you apply for this position specifically, or did you also have others in mind?

I actually thought of applying for the Chairman position a year in advance before the year I'm doing it right now. And at that time, I was doing my minor abroad, exchange in Leeds, in the UK. At the time, I figured I was either going to do this or I was going to finish my bachelor's and I only had to do my thesis back then. It felt better to finish my thesis at the time, just have my bachelor's degree rounded off, do my minor in finance, like I did this half-year, and then perhaps apply again for a board year.

Chairman was my first choice, but it's all about the experience, and you get the experiences just as well, or perhaps in just a different way with other positions. I also applied for the part of the external relations of the board because that was also my position when I was doing the advisory tour. I like it because I like to get in contact with people and I figured that will give me an edge when I want to apply in a job market, knowing a lot of companies, but now still I get to go along with our external relations, sometimes when he goes to our partners.

Talking about preparations, how did you prepare for your installment? What did your first few days as candidate chairman look like?

Normally, the chairman gets chosen in advance. So my successor, for instance, will be presented on the 13th of December this year, but due to the merger, the previous boards were very busy with finishing up the last details of the merger, and they figured it would be best to recruit the entire board, so six people, at the same time. So on the first of February 2021, the six of us got a call saying “Congratulations, you are on the board!”

The first six weeks are a lead-up to where you get actually installed. Starting from the first of February, we began working straight away - full weekdays, and on the 15th of March, we were officially installed so that gave us six weeks of getting to know each other working on our policy. Actually, on the first weekdays on Monday, I got a call and we had our policy weekend so we went away from Thursday to Sunday to a bungalow somewhere in nature and we just worked on our policy for well, about I'd say, for three and a half days straight. So that was quite intense.

This sounds like a nice start actually, but it's quite intense! So, how has it been aligning the visions of both former associations of PM and Risk?

Well, the visions of both associations have always been similar, it's mainly their focus on what studies they have, were different. So the vision of both associations is to bridge the gap between theory and practice by organizing formal and informal events, so there wasn't much aligning to do there. I'd say, The biggest challenge is making a merger a success and we believe we succeeded!

It was quite a big challenge for us at first, to figure out what were the strong points of both associations and how to integrate them in the most proper way, but previous boards already set up quite nicely for us in a merger document. They set aside the strong points of the events they organize, and they set up what events will take place under FSG the next year. But still, people have to feel comfortable within the association. I think that is quite a vital aspect as well. But apart from that, I think it wasn't that hard to incorporate the vision.

It sounds like a nice start for the association itself as well. And we are curious, you started your role as chairman during the pandemic, what has it been like as we emerge from the lockdown, what has been the biggest challenge?

There were two separate things, of course, there's a challenge with COVID, how to deal with that and there are challenges associated with the merger and how to successfully implement it. Starting with COVID, their previous boards of Risk and PM, they did not have any or hardly any physical events during another year which is quite a shame of course.

The main challenge still is that especially in the beginning until the end of September, every event had to be thought out in an online as well as physical fashion, so that was quite a big challenge for not only us but for committees as well. This is one of the main points in our policy plan we formulated in the beginning, to evaluate COVID-19 and act up it, but I think we’ve been very successful and most events can happen physically. That's what makes it the most attractive to be part of our association.

Now, the challenge with the merger and the things we did, in the beginning, was, of course, creating the corporate identity. So an entirely new association but builds on a sturdy foundation of the previous two associations was quite challenging in the beginning because you have no starting ground apart from the foundation you build on.

So as a chairman, what are your responsibilities?

My main responsibility is to create a suitable environment for all my board members to operate in. I think that is the main thing that I want to accomplish, that people feel at home where we work and that they can, speak freely about what they want. That we are just in the end to have a nice time together, because of, the nice environment we've all created together.

But besides that, I'm the main contact to our university. So I talked to all our professors, to all the other associations within Groningen, but outside of Groningen, as well. So talking about that, we have the FAN, the financial associations of the Netherlands. And within that, there are other associations that focus on the same studies we do (In Amsterdam, Rotterdam, Tilburg, and Maastricht). We get together once a month, either physically or online, just to brainstorm some ideas and get to know each other, and learn how it goes down in other cities. Each of us also has our own committees we work with, and we guide; for me personally, that is the FSG International Financial program, which this year is going to Chile and they are currently in the acquisition phase of going there. They are contracting parties to sign a contract with because we want to cooperate. I also supervise the Accountancy day, the London banking tour which took place recently, and the Masterclass committee.

It appears you have quite a nice time as chairman in a formal setting, but we are also curious, is there an informal element within the board? How is the social life?

Of course, we want to do both because they are equally important! Every Monday we have our board evenings so we eat together besides working, just getting to know each other better, have a good time together that's a vital part. And besides, we have a lot of informal parties and events we go to, all of us, and it doesn't really make any sense to work together and not have any fun. We have constitutional drinks we go to together. We have a lot of dinners with each other, but also with previous boards. Speaking of, recently, we had our previous board’s dinner in Amsterdam, where all previous boards are invited and even people on the board in 2006 come and they share their knowledge and experience. So that's always fun and it's definitely not just formal.

And my last question is, do you have any words or advice for our readers who may be considering doing a board year at FSG?

If you're thinking of doing a board year at our association, I would love to tell you more about it, so if you schedule a coffee with either one of us, we can tell you what it's like, we can answer your questions, and you can get more of a feel about what it's like to to do a board year at FSG. If you want to learn more such as soft skills and have just an amazing time in general meeting a lot of new people and getting to know a lot of new companies, one of our many partners, a board year is never wasted.

I've never heard anyone say like “Oh, man, I wish I haven't done that”. In the end, you always regret the things you didn't do. I think that's a nice thing to say at the end. And again, if you have any questions, feel free to reach out and we'd love to schedule a coffee date.