To say that gas is an important hydrocarbon would be an understatement. By being responsible for over a fifth of the EU’s energy mix, natural gas is among the most critical resources on the continent. Other than for household heating and electricity generation, the commodity also serves as a raw material in the production of chemicals, fertilizers, and hydrogen. For this reason, it wouldn’t be bold to argue that without natural gas, European economic prosperity would be threatened. Yet, a significant part of the gas that flows towards Europe comes from a single supplier with a questionable reputation.

Russia as an insurmountable factor in the gas sector

In 2021 the EU imported 155 bcm (billion cubic meters) of natural gas from Russia. That quantity accounted for around 45% of total gas imports and almost 40% of gas consumption within the union. Most of the gas passes through pipelines via Ukraine, Belarus, and the Black Sea while a third is imported through Nord Stream 1 - a pipeline connecting Germany and Russia through the North Sea. The failed implementation of the second pipeline in the North Sea, or Nord Stream 2, is a remarkably interesting story, but more on that in another article. Once entered the EU, gas flows via an internal network of pipelines. The question of why the union has reached such a high dependence on a single supplier could not be thoroughly answered in anything less than a book. Nonetheless, here are a couple of brief explanations.

First, energy-dependent Europe has been a priority of the Russian administration for decades. Simply put, by controlling a significant part of the supply of a critical commodity, the Kremlin could have leverage over the continent’s economy. In addition, the Russian government has dedicated tremendous resources to discourage sizable gas exploration activities on European soil.

According to the Wilfried Martens Centre for European Studies, a political think-tank, Russia has invested US$ 95 million in campaigns against shale gas exploration in Europe. Fracking, the exploration method used in shale gas, is banned in many countries across the continent. It is arduous to assess whether the ban is a consequence of Russian lobbies or is it rather due to the considerable environmental risk associated with fracking – most probably it is a combination of both.

Second, the aforementioned sum is insignificant compared to the overall efforts of the Russian administration to bring Europe to gas-dependency. For years high-ranked European politicians have been associated with having suspiciously close connections to the Kremlin. In fact, there is a term for that process - Schröderization. It could be explained as going against your country’s long-term interest while defending Russian activities, most often in the energy sector.

The term originates from Germany’s former chancellor Gerhard Schröder. He signed the deal for the construction of Nord Stream 1 with Russia. After finishing his mandate, Schröder became head of the shareholders’ committee of Nord Stream AG – the company that was engaged with the construction of the pipeline and in which Gazprom is a majority shareholder. Recently Schröder was also nominated for a Board seat at Gazprom where the Russian state holds 50.23% of the shares.

Third, setting politics aside, Russian pipeline gas comes at a relatively cheap cost compared to potential LNG supplies of the same equivalent. The latter requires cooling gas down to 162°C, which reduces the commodity’s volume up to 600 times and allows transportation via sea. However, the entire process is expensive. LNG requires exceptionally large facilities, also known as trains, to convert the gas. In such a scenario, solely economies of scale processes make operations financially viable.

Moreover, assuming that the EU becomes a major consumer of LNG, the continent would have to compete with an energy-hungry Asia, where most of the current LNG supplies are destined to. In addition, many of the buyers in the Far East are state-backed, making demand relatively inelastic to potential price hikes. 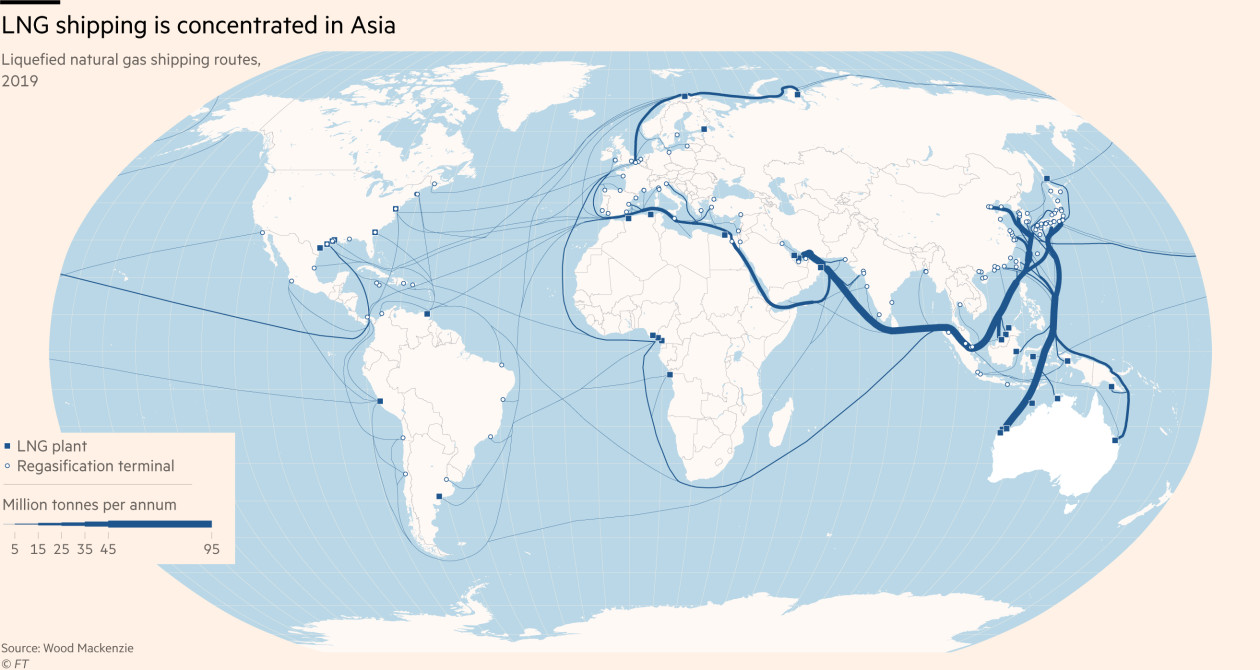 It should be noted that the Russian ruble was in an unenviable state even before the war began. As of January 2022, the currency had lost 70% of its value against the Euro since the introduction of the latter 20 years ago. Nonetheless, in the days following the war, the ruble plummeted to unprecedented levels, depreciating over 40% in two weeks.

Figure 3: EUR/RUB exchange rate since the introduction of the Euro in 2002

In an effort to stimulate demand for rubles, Putin announced that unless payments are made in the Russian currency, gas exports to the EU will cease. In theory, buyers would have to exchange their euros and dollars for rubles, thus increasing demand for the latter and pushing up its value. However, in practice, the consequences of Putin’s statement were rather abortive. EU leaders reminded that long-term signed contracts require payments in euros or dollars solely. Then, the Russian administration came up with a bizarre solution, the success of which could be debatable.

The approach the Kremlin came up with consists of a couple of steps. First, European buyers of Russian gas will be required to open both a foreign exchange and a ruble account at Gazprombank – one of the few Russian banks that wasn’t sanctioned. Gas buyers will then send Euro payments to the bank. The entity on its part will convert the sum in exchange for rubles on the Moscow bourse. The money will then go to the buyer’s ruble account in the bank. Only after that process is done, the payment goes through.

However, although the ruble has returned to its pre-war levels it is unlikely that the new payment method instigates momentum. Due to capital controls imposed by the Kremlin, Gazprom was already required to convert 80% of its foreign income into rubles. With the newly introduced requirement, that number essentially alters to 100%. The change should not be enough to cause a significant appreciation of the ruble.

With the war in Ukraine, volatility in the energy market has spiked. Commodity trading firms use various approaches to capitalize on such periods. The straddle strategy is one such example. It consists of buying both call and put options of the same underlying. The options also have the same strike price and maturity. Traders gain regardless of the direction of the move of the underlying, as long as volatility is sizable enough to cover the cost of both options. In case the above-mentioned terms seem rather unknown, a brief guide on options could be found in Link 1 under this article.

To understand why skyrocketing energy prices may not always be beneficial, let’s first have a look at the role of clearinghouses. Such entities take the opposite side of each transaction. They serve as a buyer to every clearing member seller, and a seller to every clearing member buyer. Clearinghouses could be perceived as entities that verify transactions. They are the middleman between a buyer and a seller.

Clearinghouses require margins to alleviate the risk of default on one of the two sides. However, with soaring energy prices, the risk of default rises and so do margin requirements. Trading firms could face the need to dedicate billions for margins, which impacts their liquidity.

A little over two weeks ago lobby group European Federation of Energy Traders came up with a letter urging EU governments to inject liquidity into clearinghouse members and aid them to cover margin calls. Gas futures have dropped since then. On April 4, the front-month futures on the Dutch TTF went below € 110 per megawatt-hour. Nonetheless, the issue remains on the table while increased levels of volatility could be perceived as both an opportunity, and a cause for concern for some actors in the energy sector.

While Europe is not in a position to immediately supplement a yearly flow of 155 bcm of Russian gas, alternatives are being explored. In the short run, according to the IEA, LNG imports could be increased by 20 bcm for the year. Moreover, a rise in small-scale exploration activities within Europe and deliveries of pipeline gas from other suppliers such as Norway could together account for an enlargement of supply of up to 10 bcm. From a longer perspective, the deployment of solar and wind farms should be able to offset a notable amount of the gas used for electricity generation. In addition, it would be interesting to follow whether the debate on mass shale gas exploration in Europe is revived.

One thing is certain. With the invasion of Ukraine, the Kremlin has lost its international credibility overnight. Putin and his administration are now regarded as utterly untrustworthy, to put it mildly. Consequently, moving away from Russian gas imports has been put among the top priorities of the economic agenda of the EU.