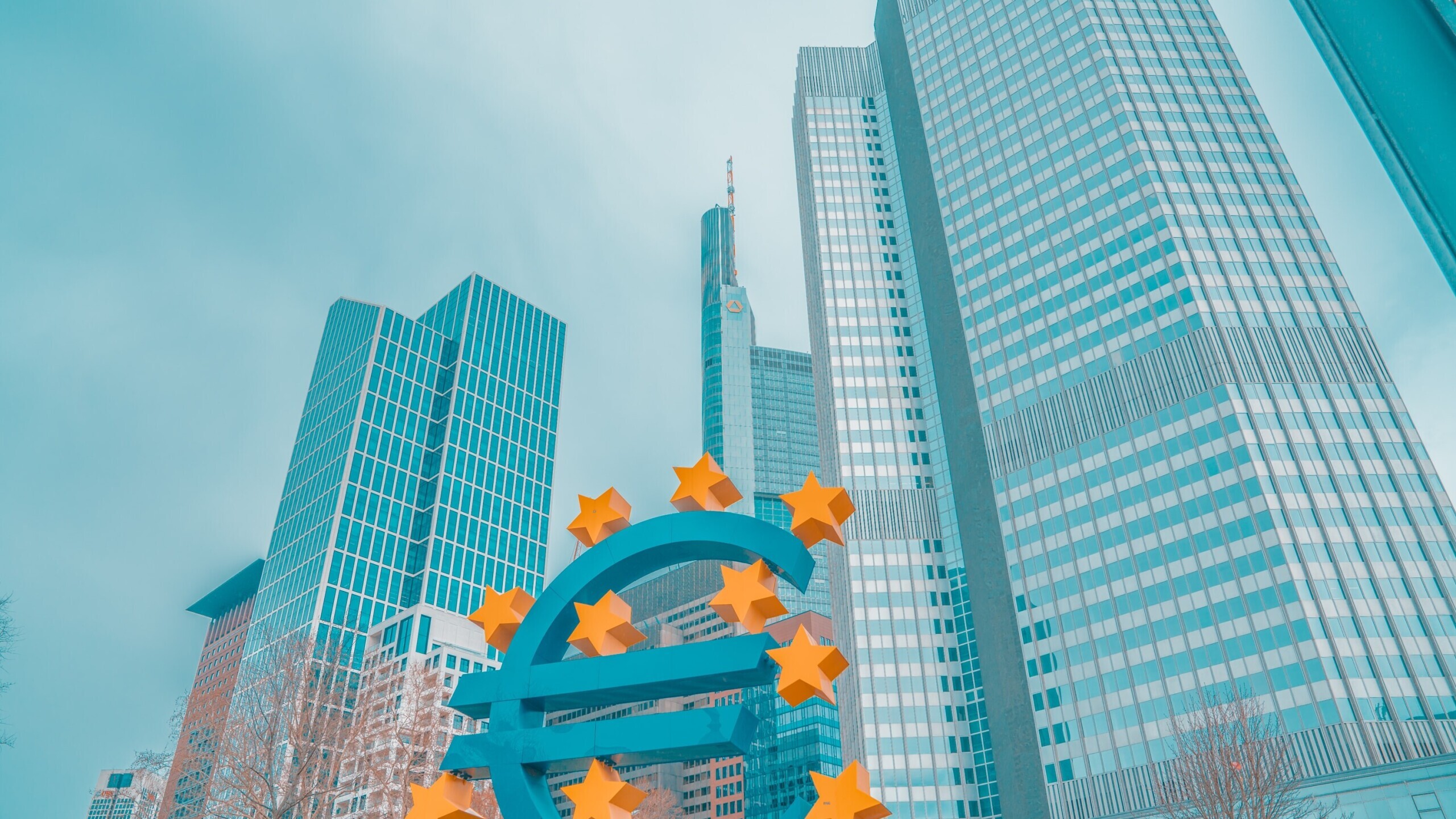 In the Eurozone, heterogeneous yields on sovereign bonds present a critical problem since such a fragmenting environment prevents the European Central Bank from fulfilling its duty to implement a single monetary policy within the union.

The fragmentation issue of the Eurozone

During a period of rising inflation such as now, a central bank would usually commence increasing interest rates in order to encourage saving, increase the cost of debt, discourage spending and ultimately – slow down economic growth.

Figure 1: When a central bank decides to increase interest rates by 0.5% at one go, that is generally perceived as an aggressive policy. 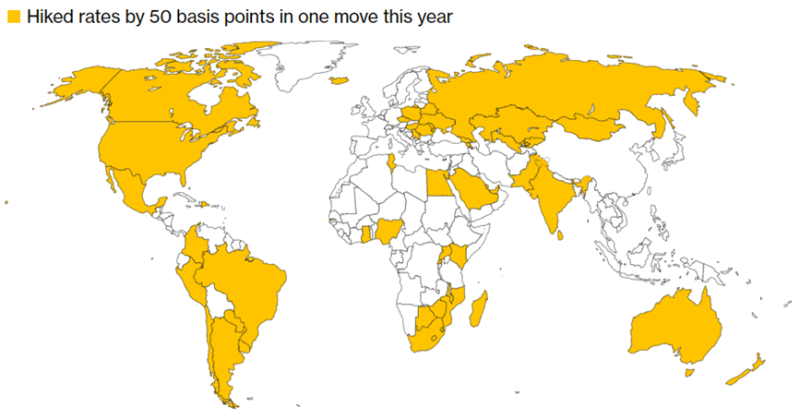 With rising prices that have been largely driven by the increased demand for goods and services post the pandemic, central banks around the globe are now lifting-off interests in an effort to tackle inflation. On the map above you can notice that the Eurozone is a major exception to that process.

The monetary union is undoubtedly among the most impressive economic projects in history. Nevertheless, the Eurozone faces some constant problems. For instance, the decision-maker in the face of the ECB must adopt a homogenous monetary policy for states with heterogeneous economies.

Figure 2: Government Debt / GDP of some of the most important economies on the continent. 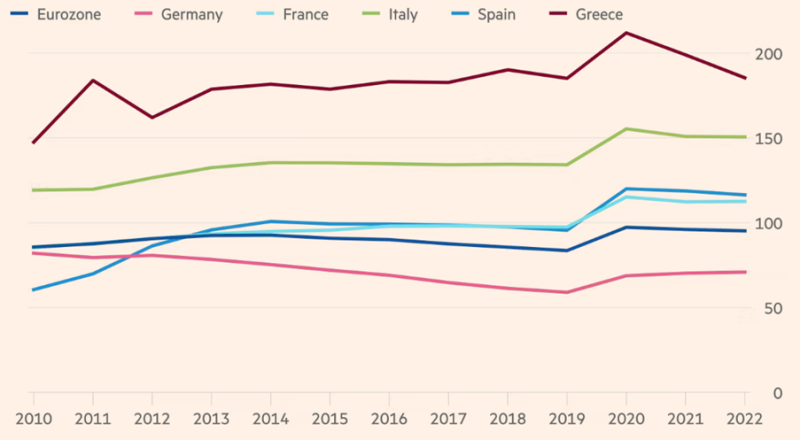 While Germany's debt to GDP is about 60%, Italy's government liabilities are one and a half times larger than the country's total economic output. It is extremely challenging to implement a single monetary policy in such a fragmented environment since each decision that the ECB undertakes has the potential to impact Eurozone members in a completely different manner.

Figure 3: The financial crisis of 2008 had a great impact on weaker Eurozone members. Consequently, the rising yields on government debt put the beginning of the European debt crisis. 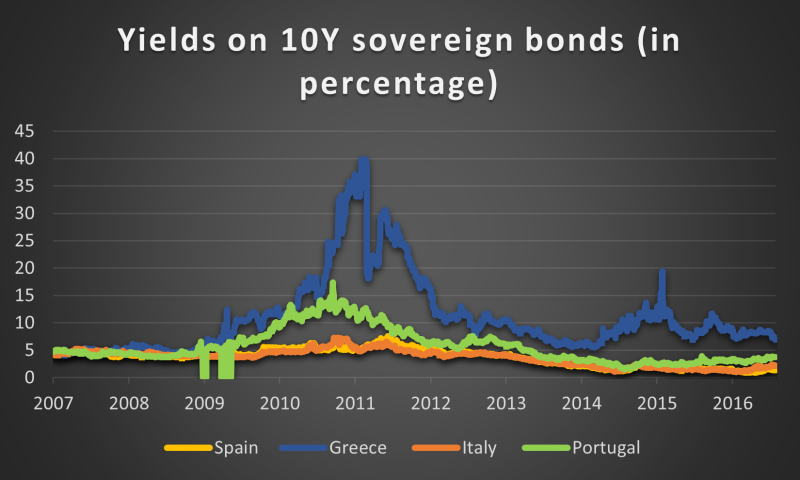 When the debt/GDP ratio rises, investors could lose faith in a given economy. In such a scenario, a sell-off in bonds may occur while yields rise since investors demand higher rewards for the increased risk of the given government defaulting on its debt. During the financial crisis of 2008, Greece's debt/GDP ratio rose sharply. Consequently, at the beginning of the 2010s investors lost confidence in the Greek economy, and yields on the country's sovereign bonds rose to close to 40%. Greece was on the edge of bankruptcy. Some other Eurozone members such as Spain, Italy, and Portugal suffered similar issues. The Euro was torn between safer economies in the North and struggling states in the South. The future of the monetary union was threatened.

Then, in 2011 Mario Draghi, an Italian economist, stepped in as the newly elected governor of the ECB. During a speech in London, in the midst of the debt crisis, he stated that the ECB will do “whatever it takes” to save the Euro. It wouldn't be an exaggeration to say that since then those three words have become the informal slogan of the ECB.

Mr. Draghi implemented a colossal loose monetary policy, cut rates, and the ECB launched a sovereign debt-buying program. By purchasing bonds, the central bank artificially stimulated the demand for the sovereign debt of struggling Eurozone members. Accordingly, bond prices increased while yields dropped. The crisis was overcome and the Euro was saved. If you want to learn more about Draghi’s adventure as a governor of the ECB, this piece is a must-read.

Although today the Eurozone is far away from a debt crisis similar to the one that happened 10 years ago, some signs of insecurity within the monetary union could be noticed.

Figure 4: The spread between yields on Italian and German 10Y bonds. This is a key indicator of the health of the Eurozone debt market. 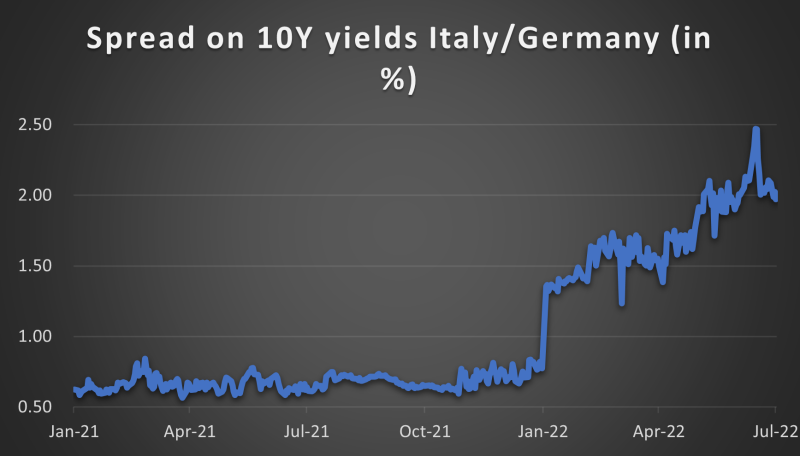 The spread between yields on government bonds of more fragile Eurozone members such as Italy, and wealthier states like Germany widens. Debt investors in riskier economies are demanding higher yields since they tend to believe that the Italian, Greek, and Spanish economies are ill-prepared for a recession in the coming quarters. If the central bank doesn't succeed in narrowing the yield spread, the problem could deteriorate quickly and the debate about the future of the Euro could be revived.

How could the ECB tackle fragmentation?

Currently, due to the record-high inflation within the continent, the ECB is in a position where it has no choice but to move away from its loose policy, start hiking interests, and adopt a hawkish approach in order to decrease consumer demand and drive down inflation. In a rising interest environment, bond yields tend to increase as well. However, as hinted above, yields on the debt of some Eurozone members are already worryingly high with the ECB yet to announce its first of a series of rate hikes.

During a panel in Portugal a couple of days ago Christine Lagarde, the ECB's governor, mentioned that the central bank is working on a set of tools to tackle yield fragmentation and combat high inflation. By now, you have probably grasped that resolving both issues simultaneously is quite a challenge.

To push yields in struggling member states down, the ECB will probably have to launch another bond-buying program. In other words, the central bank will stimulate the demand for sovereign debt and inject liquidity into southern economies. Such a move is usually used as an expansionary tool to stimulate economic growth. That process would be a direct countermeasure to a rising interest policy where the main goal would be to restrict demand and drive down growth.

Although the ECB is expected to give more details on how it is planning to resolve both yield fragmentation and inflation, Lagarde has already stated the first concrete step of the plan. The ECB will reinvest the capital from maturing sovereign bonds that the central bank purchased during the pandemic.

The ECB will use about €12bn a month to purchase the sovereign debt of Italy, Spain, and other countries in the South. At the same time, the central bank is also expected to gradually begin increasing rates from July. It is important to highlight that the risk of the two processes offsetting each other presents a major problem.

The ECB is in an unenviable position. The central bank needs to tackle inflation, support struggling members, and assure the long-term prosperity of the Euro. If Lagarde's tools to tackle inflation and fragmentation simultaneously come short, the entire concept of the monetary union might have to be revised.