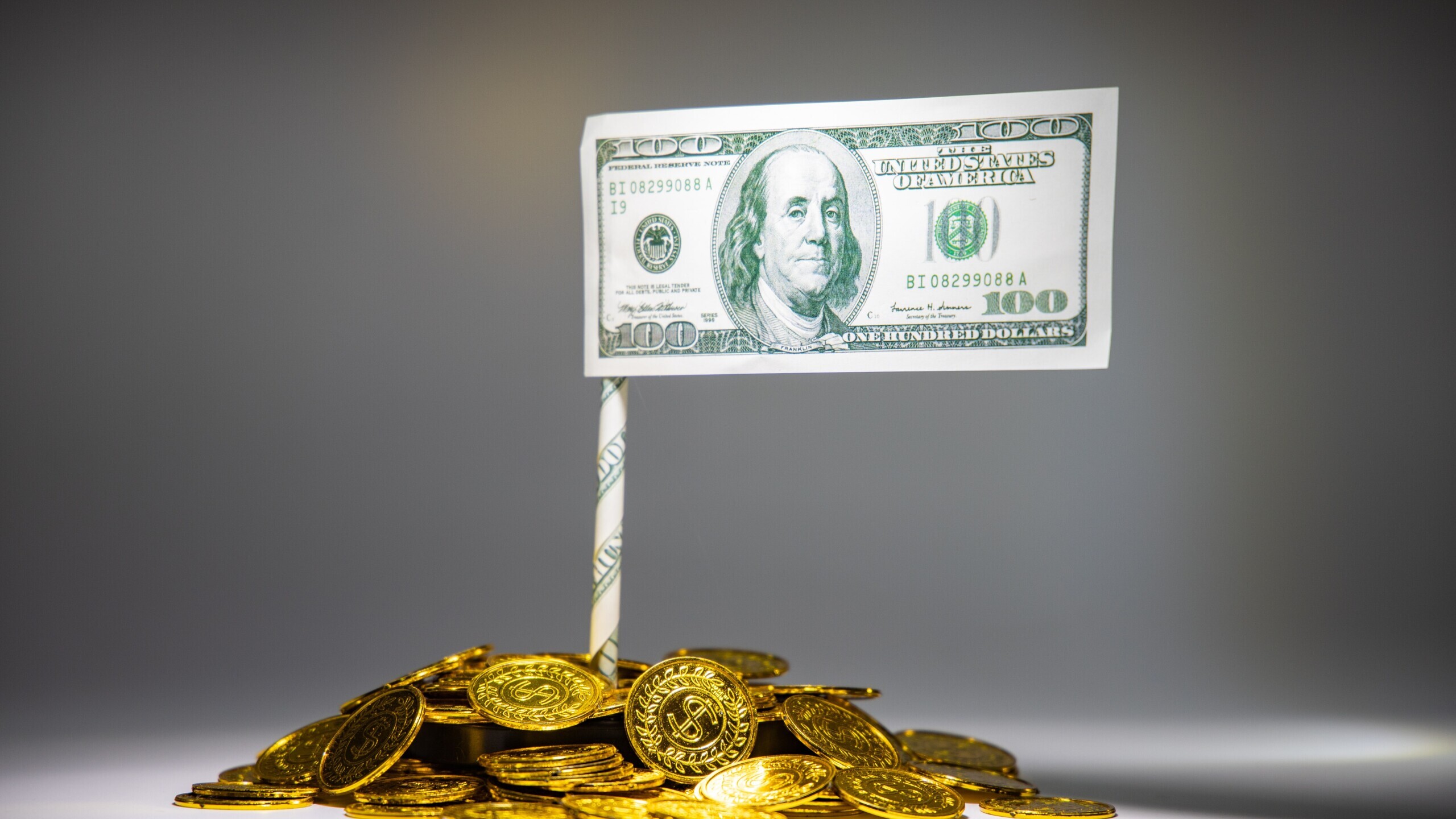 Developed economies are entering a slowdown and to protect their portfolios investors are moving away from riskier assets, prioritizing safe heavens. The US dollar has been historically perceived as an asset that appreciates when global uncertainty rises. At present, the currency is at its highest level since 2002.

Figure 1: The DXY index. It measures the performance of the dollar against a basket of other developed-market currencies such as the Euro, the Yen, and the Sterling.

For the first 8 months of 2022 alone, the DXY went up 15%. The index is largely driven by the EUR/USD exchange rate since the Euro accounts for about 57% of the weight of the index.

The Fed as the main driver of the dollar’s appreciation

Since the beginning of the year, most central banks have adopted a hawkish policy in order to tackle the rapid acceleration in consumer prices. Hiking interests is leading to an increase in the cost of borrowing, which on the other hand should taper demand. This process is supposed to bring inflation down to central banks’ target of 2%.

According to Economics 101, when interests are lifted, bond prices drop and yields rise. The process would attract foreign investors since they would receive higher returns compared to similar assets in their home country. Consequently, the demand for the local currency, in that particular case the dollar, grows. At present, the Fed is in a position where it can hike much more aggressively than the ECB.

Figure 2: Key interest rate of the Fed and the ECB. Although the Fed’s rate is currently set at 2.5%, swaps forecast an 80% probability of the central bank pushing the rate up by 75 basis points in the upcoming meeting in September, effectively reaching a fund rate of 3.25%.

The difference between the fund rates of the two central banks will probably extend to 200 basis points. During the past months, the Fed’s governors led by chairman Jerome Powell have insisted on their willingness to hike as much as it is required to slow down inflation.

The Fed bases its decisions on inflation data such as the Personal Consumption Expenditure (PCE) and the Consumer Price Index (CPI). However, both metrics, as well as most other inflation data for that matter, are lagging indicators. Therefore, there is a real possibility that the Fed overtightens or in other words, hikes rates too much. That could drag the US economy into a grievous recession. On a side note, conducting such real-world experiments is one of the reasons why Economics is a fascinating field.

Here are a couple of important points that chairman Powell made at the central bank’s annual conference in Jackson Hole:

“The Federal Open Market Committee's overarching focus right now is to bring inflation back down to our 2 percent goal. Price stability is the responsibility of the Federal Reserve and serves as the bedrock of our economy. Without price stability, the economy does not work for anyone.

…. Reducing inflation is likely to require a sustained period of below-trend growth. Moreover, there will very likely be some softening of labor market conditions. While higher interest rates, slower growth, and softer labor market conditions will bring down inflation, they will also bring some pain to households and businesses. These are the unfortunate costs of reducing inflation. But a failure to restore price stability would mean far greater pain”.

It will not be an exaggeration to say that the above statement rather seems like an affidavit to bring price stability. In essence, Powell is more willing to overtighten than to start cutting rates too soon, risking a re-surge of inflation. In the latter case, the Fed risks losing credibility that is already shaken by the bank’s erred macro forecasts in the near past.

Figure 3: In the days following the speech, the EUR/USD slipped below parity for the first time in 20 years.

The issues surrounding the Euro

Since Putin decided to invade Ukraine at the end of February, the Kremlin has been actively using oil and gas exports as a geopolitical weapon. The squeeze in energy supply will most probably drag the continent into recession.

Bearing in mind that the Eurozone inflation is largely driven by the supply side of the market, the success of the ECB’s hawkish policy could be obscure. Central banks’ main tools to influence monetary policy are directed toward the demand edge. Moreover, the ECB is not in a position to hike rates aggressively anyway, since highly indebted countries such as Italy and Greece may be caught off guard.

Figure 4: Italy’s government debt refinancing scheme. The country’s 10-year yield is at the highest level since the debt crisis of 2011/12 while the Italian government, whatever might be, should rollover over €500bn in the next two years.

The yield on 10-year Italian government bonds surpassed 4% – a quadruple in a year. European economies are dominated by a recessionary sentiment and an economic slowdown seems rather inevitable. Consequently, investors move away from European assets, pouring money into other developed markets such as the US.

Figure 5: Monthly net inflows in European ETFs (bn USD). Investors pour money out of Europe at the fastest pace since Brexit. Net inflows are negative for a sixth consecutive month. 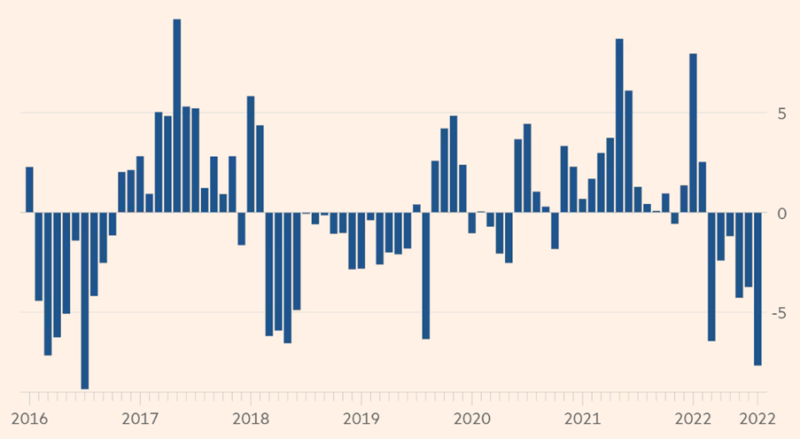 Consequences of a strong dollar

The Reagan era demonstrated that during times of tight monetary and expansionary fiscal policy the dollar appreciates. Today while the Fed is hiking, the Biden administration launches stimulus programmes such as the $50bn Chip Manufacturing Act, and the $740bn Inflation Reduction plan. Bearing in mind these macro developments, the dollar’s appreciation is not surprising.

A strong dollar, however, harms American corporations. When a country’s currency appreciates, ceteris paribus, exports drop since purchasing goods and services from the given country becomes more expensive. Furthermore, there is an inverse relationship between the strength of the dollar and revenues realized abroad. In essence, when a company converts its foreign revenue into dollars, the stronger the dollar the lesser the foreign revenue and vice-versa. It is important to know that the energy sector is an exception to that rule since most of the international trade of oil and gas is conducted in USD.

Figure 6: Breakdown of revenue of the S&P 500, by geographical region. 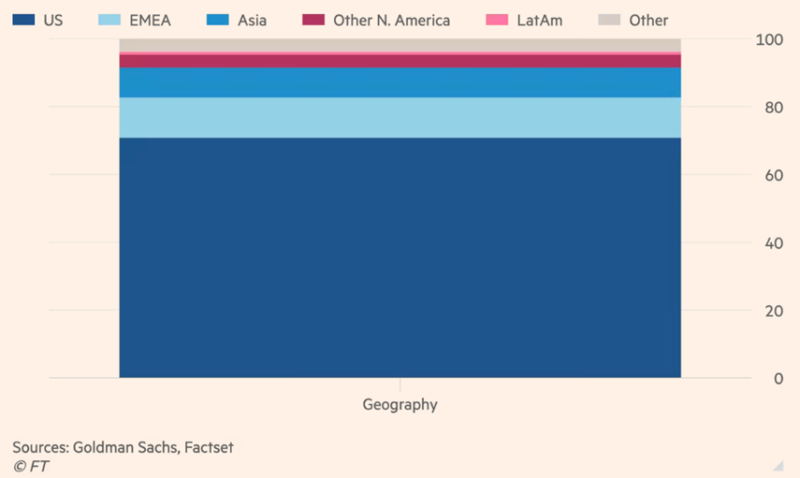 About 30% of revenues of the entities comprising the S&P 500 are generated abroad. To avoid currency risk, most major corporations develop hedging strategies. However, foreign revenues are rarely fully hedged. Johnson & Johnson, for instance, expects a wipe out of $4bn in revenue for 2022 due to the strong dollar. This amount translates to a downward revision of 5% in comparison to projections of management at the beginning of the year. IBM stated that the dollar’s appreciation would eat up 6% of the company’s global sales. Other major corporations such as Apple which generates about 60% of total revenues abroad are also suffering from the same issue.

It would not be surprising if the dollar stays at an elevated level for at least another couple of months. Before the currency returns to a more historically reasonable level, the Fed should see sufficient evidence of an economic slowdown that it stops hiking – something that probably will not happen before the beginning of 2023, at best.