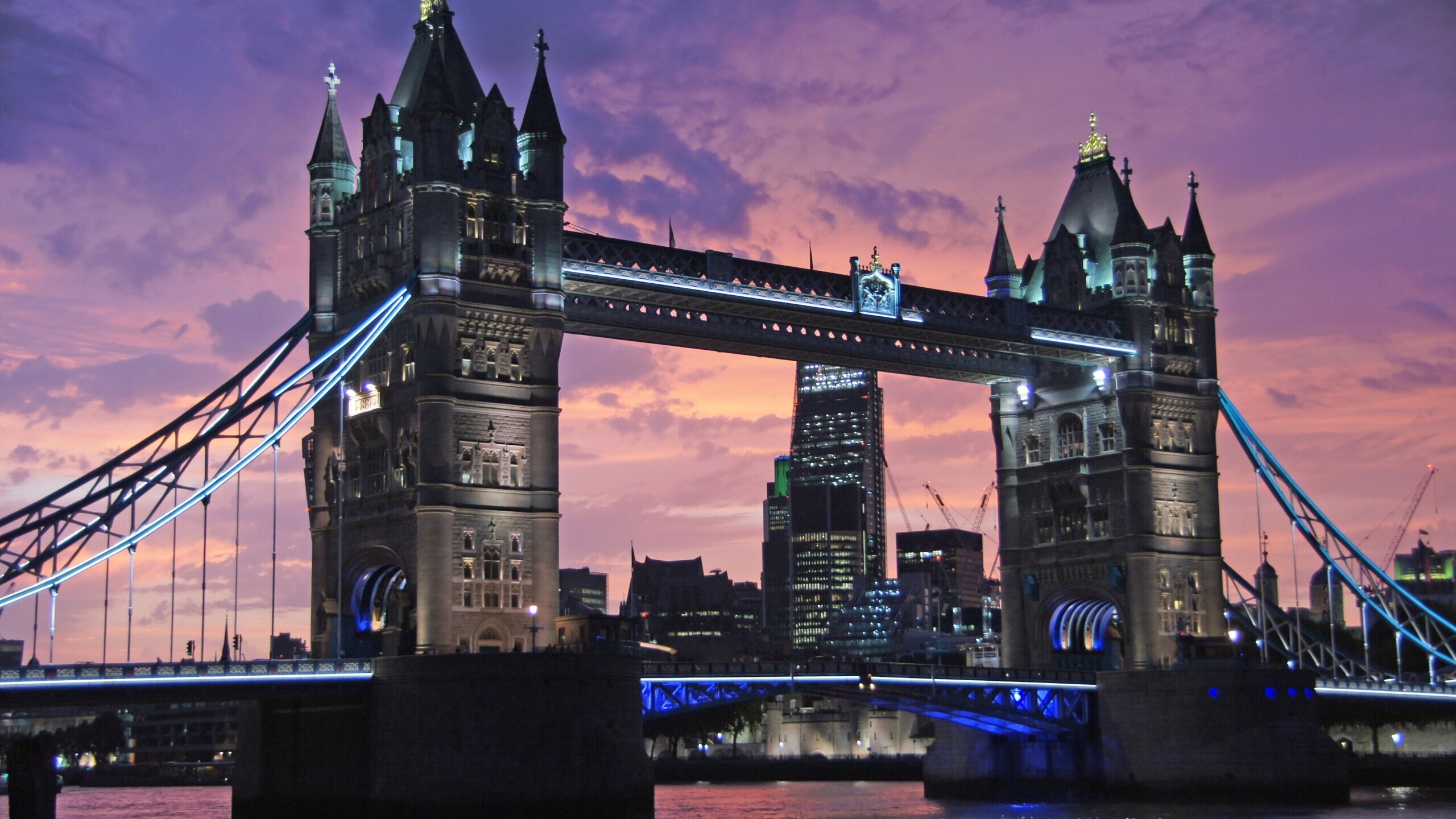 The UK is experiencing an economic slowdown due to the aftermath of BREXIT, COVID-19 restrictions, all-time-high levels of inflation, and rising energy prices. In order to fight these challenges, UK’s former Prime Minister Truss introduced a “mini-budget”, including e.g. tax cuts. Never would she have anticipated that her “mini-budget” would risk the UK's financial stability. How could it get to this point and why did the Bank of England have to step in to avoid what some bankers called the UK Lehman moment?

Liz Truss was appointed UK’s Prime Minister on September 6th, after Boris Johnson was forced to resign in July 2022. In her opening speech she took a bearish stand on the UK economy, elaborating on issues provoked by high inflation, rising energy bills, and the expectations of an economic slowdown.

In order to fight these challenges, Truss introduced the so-called “mini-budget” but excluded funding through any windfall tax. On Friday, September 23, the details of the “mini-budget” were announced by the Chancellor of the Exchequer’s, finance minister Kwasi Kwarteng, in the fiscal statement “The Growth Plan 2022”¹. It turned out that the “mini-budget” is not as mini as many might have thought. In fact, it included £45bn of unfunded tax cuts, the highest tax cuts since 1972, on top of the cap on energy prices². This is troublesome news for investors because usually tax cuts are offset by an increase of another income source of the government. Ultimately, it turned out that the “mini-budget” totalled to an extra £76 bn of government borrowing over the next six months alone. This led to a sharp reaction in the financial markets.

First, let’s understand and set the initial stage: High inflation expectations and a tighter policy of the Fed had already put UK’s sovereign bonds under pressure. On the one hand, tighter monetary policy leads to higher US bond rates and consequently – higher returns for investors. Thus, investors would move investments from the UK to the U.S., thereby lowering demand for UK assets. Higher inflation, on the other hand, implies a lower expected return relative to real assets, which leads to a decline in demand. At the same time, the real cost of borrowing decreases, leading to an increase in gilt’s supply. Hence, bond prices decrease while the yield increases (Fisher Effect).

After the announcement on Friday, investors feared more permanent inflationary pressures, and questioned whether the economic stimulus outweighs the cost of serving the increased deficit, considering the expected rise in interest rates.

As a result, investors sold UK bonds and the gilt market experienced its biggest daily loss since the early 1990s on the following Monday, 26th September 2022, simultaneously sending the sterling to its lowest level against the dollar since 1985. On Tuesday morning, in an unusual move, the IMF openly criticised the UK government and urged it to “re-evaluate” its plan, causing the sterling to fall even further to US$1.06³. 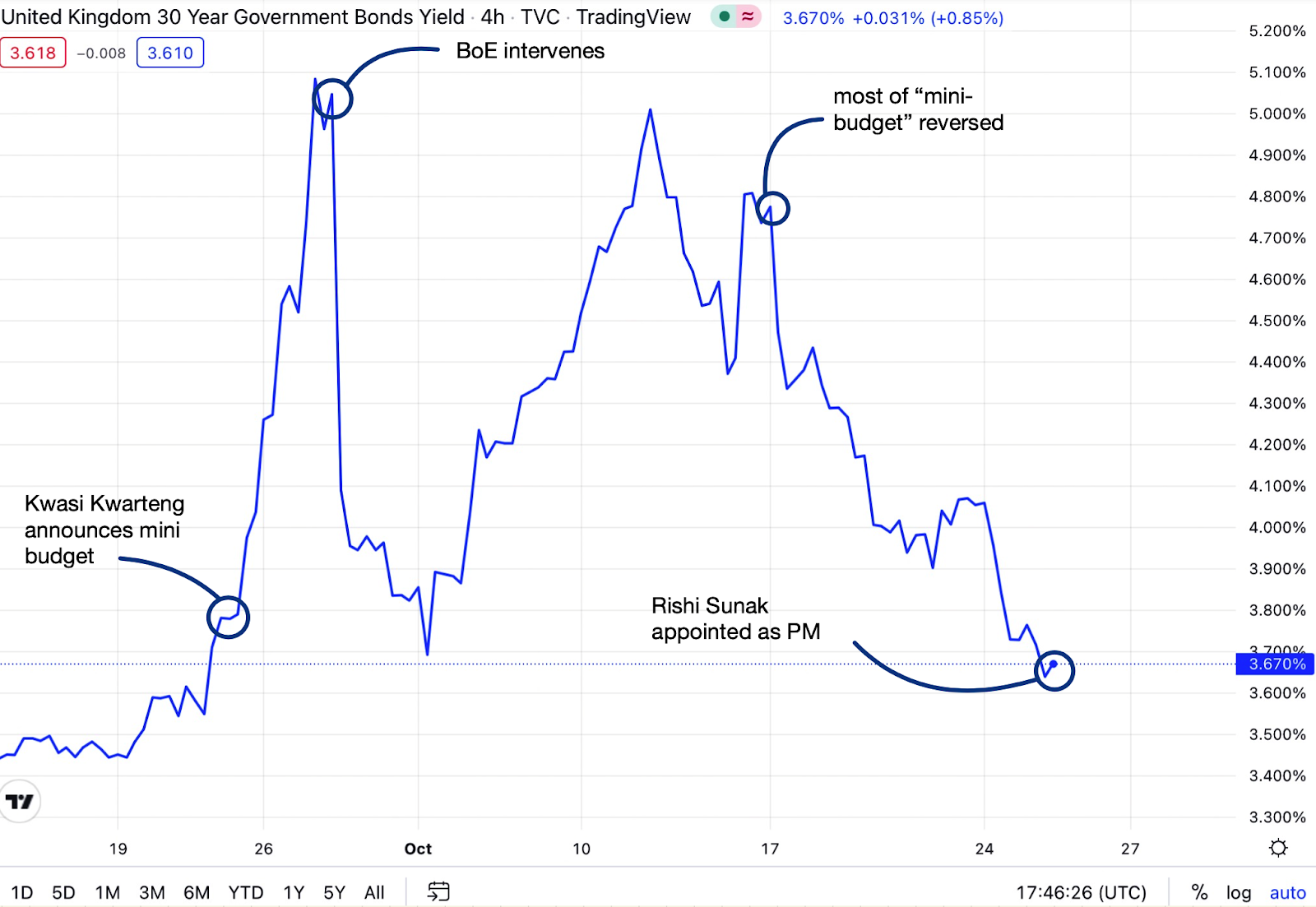 In a news release on September 28th, the BoE announced that it will purchase long-dated gilts “on whatever scale is necessary” from September 28th to October 14th and postponed the beginning of selling down its £838bn in gilts that were due to commence next week⁴. Following the announcement, thirty-year gilt yields finished the day more than 100 basis points lower at ~4% after they rose to ~5% in early trading, marking the biggest single day fall since at least 1992, when Refinitiv records for 30-year gilts began⁵.

Close to the UK's “Lehman” moment?

Considering the BoE’s goal to bring down inflation and shrink its balance sheet (QT), pledging to buy £5bn gilts daily for 13 days seems counterintuitive. Buying bonds increases the BoE’s balance sheet and more money gets injected into the economy. This is an expansionary policy likely to cause inflation in the long run. However, the BoE justified its actions by stating “were dysfunctions in [gilt] market to continue or worsen, there would be a material risk to UK’s financial stability”.

In order to understand what risk the BoE is talking about, we first need to understand pension funds’ risk management. Pension funds guarantee retirees payments in the future through defined benefit plans, no matter the performance of the financial markets. Therefore, the present value (PV) of future benefit obligations are pension funds’ liabilities and to ensure future payments, these liabilities must be hedged against interest rates and inflation. They do this by using liability driven investments (LDI) - also known as liability hedging.

Figure2: Balance-sheet of a pension fund 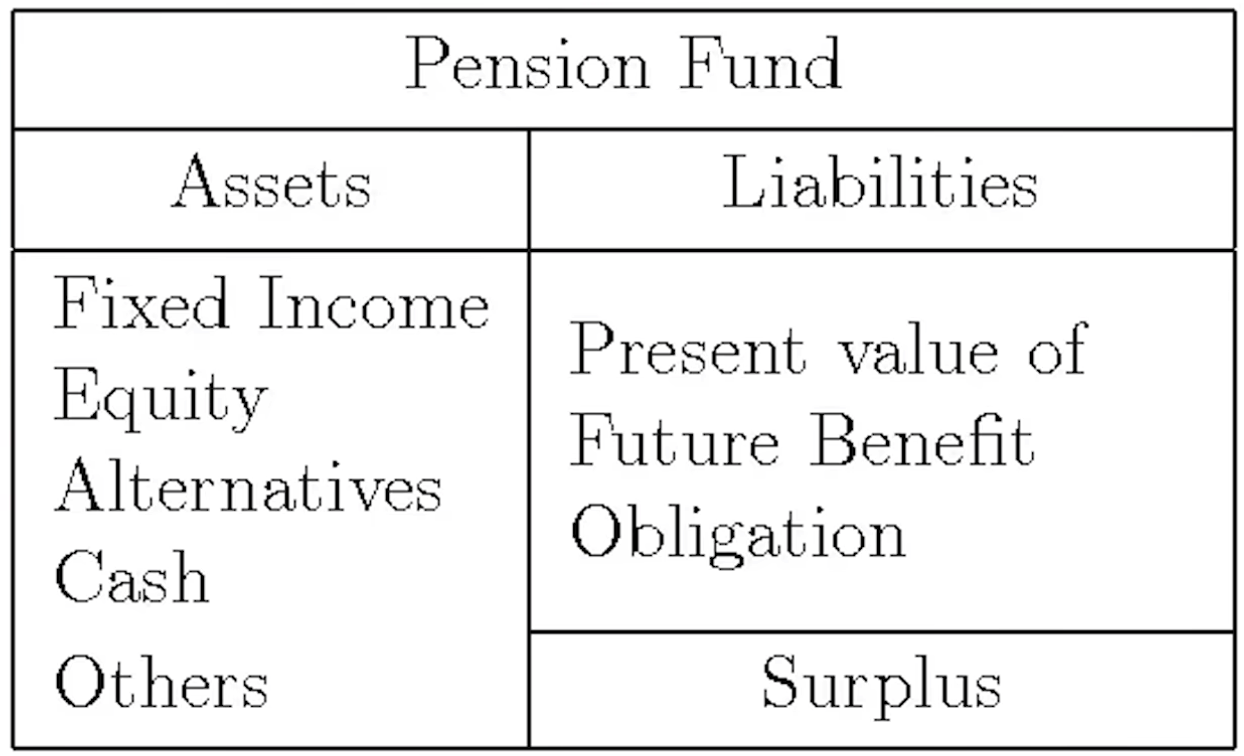 An obvious liability hedge is to use bonds on the asset side to match liabilities. This is because if the interest rate ( = discount rate) goes down, the PV of liabilities increases, but at the same time, bond prices increase, and vice versa. Hence, the goal of achieving that assets and liabilities move in the same direction is met.

That being said, here comes the catch:

During the low-interest environment in the past decade, pension funds realised that using bonds as a hedge means locking in a very low-yielding asset. This is when derivatives, particularly interest rate swaps, became more popular since only a small principal needed to be paid upfront (margin). The remaining cash could then be used to invest in higher yielding assets. This strategy works as long as volatility is low.

Now, keeping in mind the recent unexpected volatility burst, pension funds, whose risk models are usually based on 10-20 year historical volatility, were caught off guard. The sudden increase in the interest rate resulted in significant increases in margin requirements, which had to be met within hours, instead of days. Since the remaining cash was invested in riskier assets, which clearinghouses do not accept as collateral, pension funds faced a liquidity constraint problem. Their last option was to sell their bonds, thereby putting more downward pressure on the bond market. 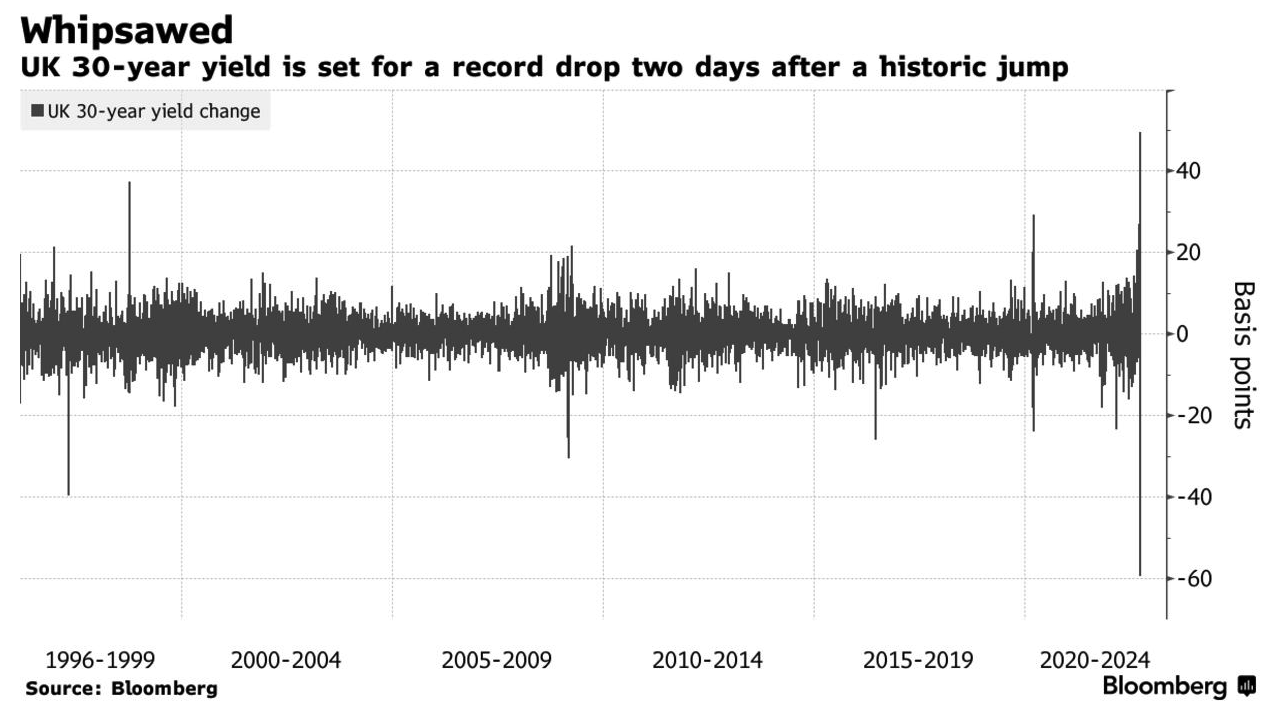 A senior London-based Banker said on Wednesday morning that there were almost no buyers of long-dated gilts and “It was not quite a Lehman moment. But it got close.”⁶

In summary, the unfunded “mini-budget” caused investors to lose confidence in the UK economy, leading to a sell off of UK gilts and a sharp rise in yields. Pension funds used interest rate swaps as their liability hedge, and after the sharp rise could not meet the margin calls, forcing them to sell their bonds. This threatened to snowball a £1.7tn pound slice of the UK’s pensions sector out of control, and sparking a pension fund liquidity crisis⁷. The BoE had to step in and announce to buy £5bn gilts daily to break the vicious cycle.

This week Rishi Sunak, UK’s former finance minister has been appointed as PM succeeding Liz Truss. He was one of the people predicting that Truss’ policy will trouble the financial markets, and has a strong background in the finance industry. After him being appointed as PM, gilt yields returned to levels last seen before Truss’s “mini-budget” as investors welcomed the PM’s and finance minister’s decision to make a U-turn and scrap the tax cuts⁸.

Nevertheless, the UK's central bank stated it was still committed to a £80bn pound bond selling program over the next 12 months. Meanwhile, the challenges of high inflation and big bills coming from energy stay the same.

Moreover, as UK interest rates are expected to peak around 5% next summer, analysts at Oxford Economics wrote it particularly threatens first-home buyers and those on variable-rate mortgages (account for 25% of all mortgages) and ultimately might cause a housing market crisis⁹.